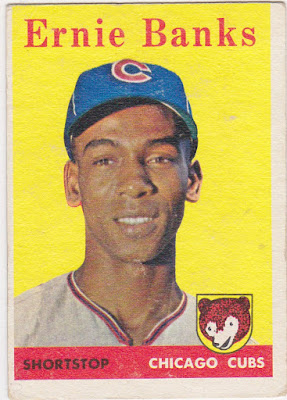 His glitzy baseball record is all right here. In 1958 he led the NL in the following: home runs, RBIs, games played, at bats, slugging pct., ab per homer and extra base hits. He won the first of two consecutive MVPs. 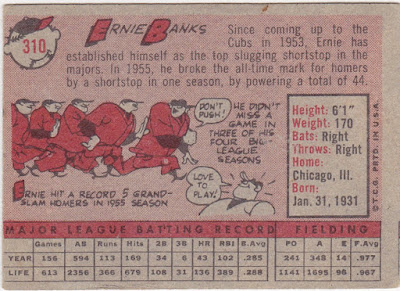 The scan did what it does to a lot of these old '58s..it highlights it faults. In hand this card looks much better than it does here. These yellow cards (and there are a lot of them!) seem to show surface wear and marks in scans that are not readily visible in hand. Odd but true.

This Banks card put me within three of finishing the set, and it completed this page in my binder. It wasn't until I slid it into it's pocket that I realized that Ernie was sharing a page with Brooks Robinson not to mention Duke Snider, Walt Alston and one of my favorite pitchers of the era, Bob Friend. As a bonus the Red Sox team card has Ted Williams in the top row! 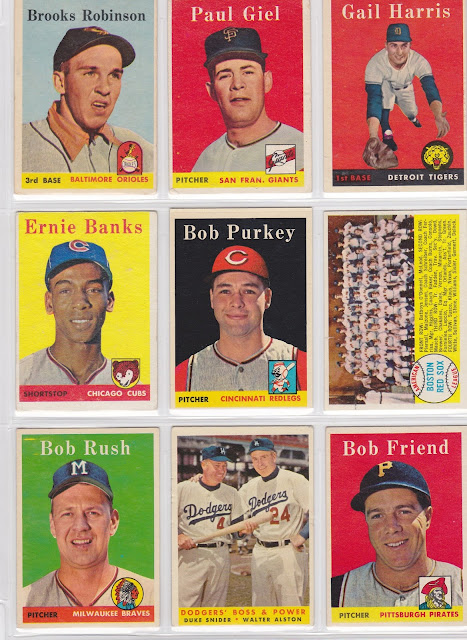 As I was admiring the page I noticed that many of the guys here are interrelated. Bob Purkey popped right out at me because, like Friend, he appears to be wearing a batting helmet instead of a cap. The Pirates were the only team that had that look back then and checking I saw that Purkey was a member of the Pirates in 1957. So that's a pretty involved airbrushing job on Purkey's card.

Now look at Bob Rush. He was a Cub in '57 and was airbrushed into a Braves cap. The artist failed to take into consideration the Braves' red cap bill. And furthermore Rush's jersey has the same neck piping as Ernie does.

Paul Giel was coming off two years of military service. Prior to that he was with the NEW YORK Giants for a couple of seasons. It's unlikely that Topps got a shot of him in a SF Giants cap in 1958 in time to use on this card so that's likely another 'cap cover-up'. But I have to say that it's one of the best I've ever seen on a Topps card pre-Photoshop. It really looks authentic.

Gail Harris was a Giant prior to 1958. His jersey in this photo has been blanked out. Another pretty good job of applying a cap logo though.

And finally Snider and Alston are posing in Ebbets Field. Their caps have been altered to the Los Angeles Dodgers logo in a pretty haphazard manner. Like Bob Rush's card the caps have a blob of unmatched blue paint covering the old logo.

So there's the story of one of the better pages in the 1958 Topps binder. Lots of star power and lots of airbrushing. And only one yellow card. That's highly unusual for this set and the subject for another post soon enough.
Posted by Commishbob at 12:00 PM