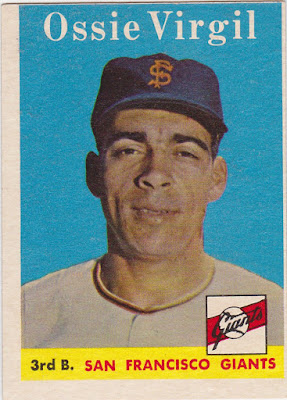 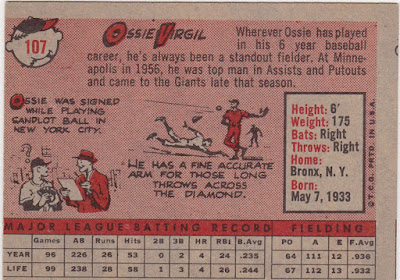 By the time this card was being pulled from Topps packs in 1958 Ozzie Virgil was a member of the Detroit Tigers. He'd been dealt to Detroit in January. His '56/'57 stint with the New York Giants was his first of two as he cycled back to the team in 1966. He had a final at bat for them in 1969. During his career he made numerous trips back and forth between the big leagues and the minors.

In nine scattered big league seasons he played every infield position, the outfield and even did some catching. Along the way Virgil also played for the A's and Pirates as well as a one plate appearance for the Orioles in 1962. That was news to me! He also spent time in the Senators and Braves' systems.

His son, also named Ozzie, was a two time All Star catcher during the 1980s.
Posted by Commishbob at 10:44 AM