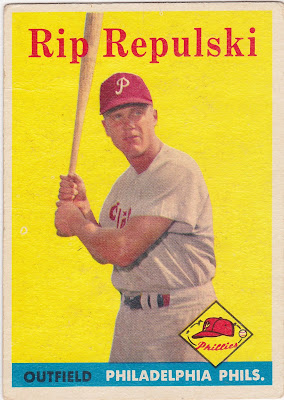 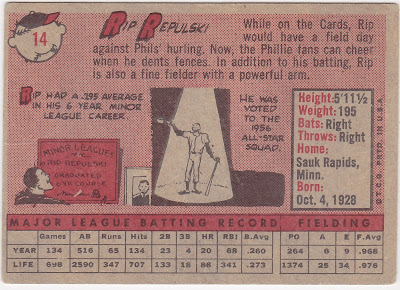 Eldon John 'Rip' Repulski came up through the Cardinals system in the late 40s/early 50s. He showed he could hit for power and average. But back then a Cardinal farmhand had a long road to the majors given the strength at the top and the talent that filtered down.

Ripulski finally debuted in 1953 as their everyday centerfielder and earned himself plenty of Rookie of the Year consideration. That season he played between Stan Musial and Red Schoendeinst. He was a fixture there in the outfield for four seasons culminating with an All-Star selection in 1956. He was known as a good fielder and he hit for power although never a big slugger.

He was traded to the Phils that off-season, had his final solid season that year, and then began a slow slide in productivity. He was a member of the Champion LA Dodgers in 1959 and drew an intentional walk from Billy Pierce in his only at-bat. He finished his career with the Red Sox in 1961.

Repulski owned a bar in his native Minnesota before working for the Great Northern railroad.