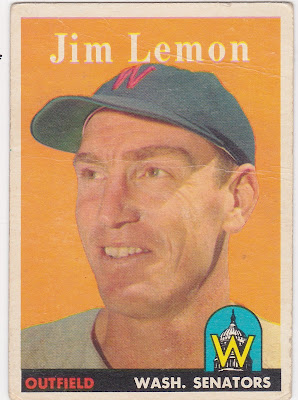 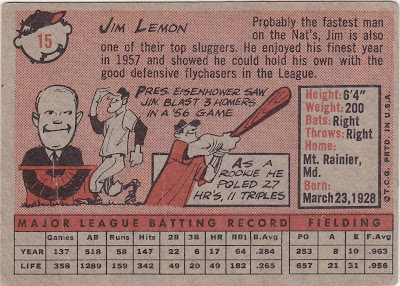 Jim Lemon was an outfield mate of Roy Sievers who coincidentally is the subject of the post I put up today in my 1960 set blog.

After breaking in with the Indians in 1950 and spending a couple of years in the service Lemon got his feet under him with the Nats who purchased his contract in 1954. In his first full season as a starter, 1956, he led the league in whiffs AND triples which I find rather amusing. The huge dimensions of Griffith Stadium probably contributed to the three-bagger total.

He played 10 years for the Senators/Twins and had an outstanding 1960 season with 38 homers and 100 RBIs. He made his only All-Star team that year. Interestingly he finished his career with the Phils and White Sox which are the same clubs that Sievers played for after he left the Nats.


The first thing that strikes you about this card is the cartoon which portrays President Dwight Eisenhower. Ike was a baseball fan and Lemon was his favorite player. The three-dinger game that is mentioned in the cartoon's text is elaborated upon in his SABR bio's opening paragraph.
Posted by Commishbob at 2:04 PM