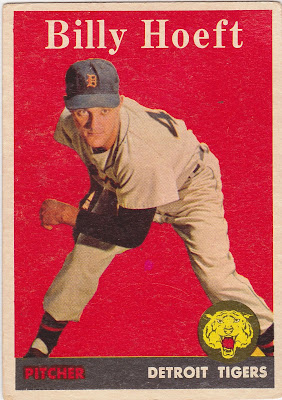 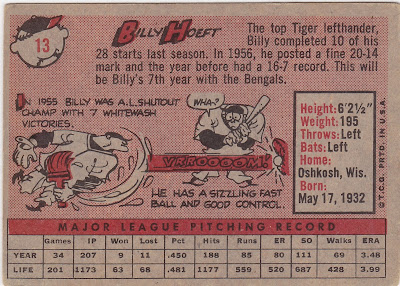 He had 20 wins the following year but his other numbers dropped off and show the error of basing one's evaluation of pitching on wins. (Guilty as charged). He had an outstanding year for the Orioles in 1961 as a swingman making 12 starts among 35 appearances. He had a 2.01 ERA and a 1.167 WHIP.

In September of 1953, he became the ninth pitcher in history to record an 'immaculate inning'...three strikeouts on nine pitches. The game has changed a bit since as this occurred eight times in 2017 alone.

The best thing about the back of the card is Topps referring to the Tigers as the 'Bengals'. When I hear that I think of sitting on our front steps and scanning old Sporting News headlines on Saturday afternoons as a kid. Old school.
Posted by Commishbob at 4:44 PM