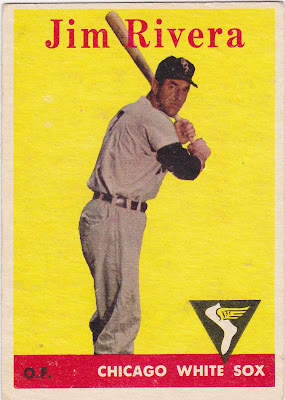 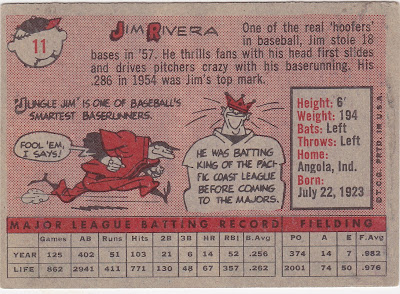 'Jungle' Jim Rivera was a New York boy who grew up under difficult circumstances and spent time in prison before playing baseball, quite well btw, in the 1950s. He bookended a ten year White Sox run with time spent with the Browns and Athletics.

He was an excellent outfielder and while he hit only .256 for his career, he led the AL in steals in 1954 and was second on six other occasions.

Rivers'a story is one which I could see being the plot of a Mickey Rooney movie and it makes his SABR bio a worthy read.

I'm partial to any card with that Flying Sox logo, this one especially. I think I recall this one from my earliest days as a collector. Those should actually be called my days of interest in cards. I didn't have any '58s that I recall but I had a friend down the block in Jericho on Long Island that had some. I remember the cards more so than her.

Posted by Commishbob at 8:46 AM