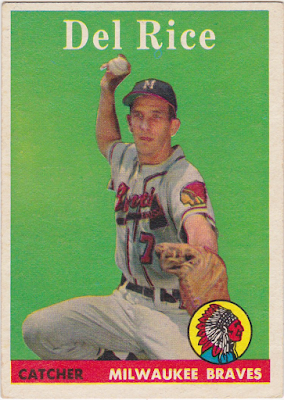 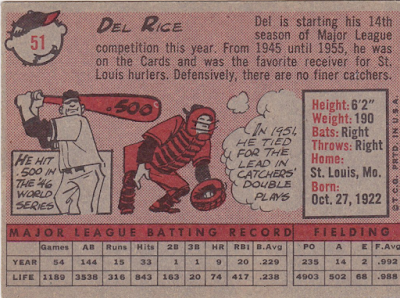 Del Rice played for 17 seasons in the majors after signing with the St. Louis Cardinals in 1941. He made the Cardinals as a platoon in '45. He became the Cards' primary backstop in1950 and held that role through the 1953 season. He played in three games of the 1946 World Series splitting time with Joe Garagiola behind the plate. He went three for six in the Series and was catching when Harry Brecheen pitched a shaky top of the ninth to nail down Game Seven and the Cardinals' title.

1953 was the year he made his only All Star team (Campy played the whole game). His playing time decreased in 1954 and in June of  '55 he was dealt to the Braves.

Rice backed up Del Crandall through the second half of the decade as the Braves made two World Series appearances, winning the title in 1957. He caught Games 3 & 6 of the Series and picked up a hit in six at bats.

In 1958 he hit .223 in very limited duty behind Crandall. He did not get into the World Series that year but would have played in Game Six had Frank Torre, who was hitting for Crandall, been able to tie the game in the bottom of the 10th. Torre ended it by lining out to Yankees' second baseman Gil McDougald with Hank Aaron on third.

His playing time dwindled and by 1960 he was off on a tour of four big league towns to wind things up. He even got one at bat with the Orioles that year! He retired after spending the 1961 season with the expansion Angels.

Rice, who had also played pro basketball early in his career, managed, coached and scouted for a couple of organizations after his playing days.

Like most of the Braves in the set Rice resides on a green background. His name on the card's back is rendered in the less frequent 'plain' font. I really need to look into this aspect of the set in more detail.
Posted by Commishbob at 12:58 PM