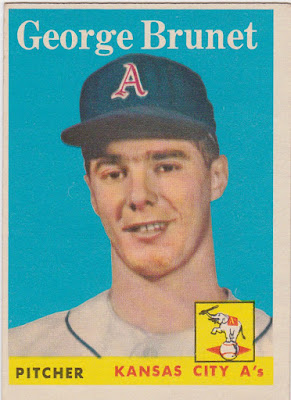 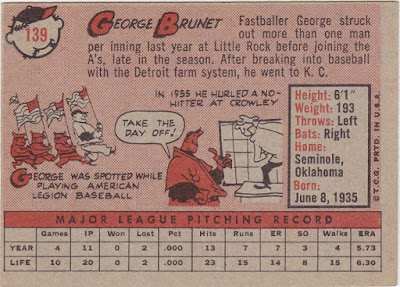 This is George Brunet's rookie card. He had debuted with the A's in 1956 and spent several years bouncing between the minors and majors before establishing himself with the 1965 LA Angels.

He spent the 1958 season in the minors and rehabbing from the effects of a blood clot in his arm. His story..spending time with nine major league teams, becoming a Hall of Famer in the Mexican League where he pitched into his 50s, his crazy off-the-field life...all of it is included in this article on the Hardball Times site. Rather than recount it here I urge you to click thru the link and read the story. I remember Brunet as a character the Jim Bouton immortalized in Ball Four.

One note that jumped out at me when looking at his Baseball Reference page...in 1968 with the Angels he led the league in losses for the second consecutive year but had an ERA of  2.86 and a WHIP of 1.05.

Including his years in the Mexican Leagues he pitched 36 years of organized ball. I kid you not.
Posted by Commishbob at 12:13 PM