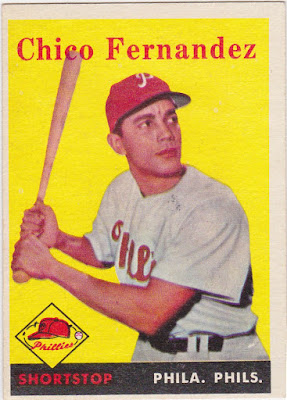 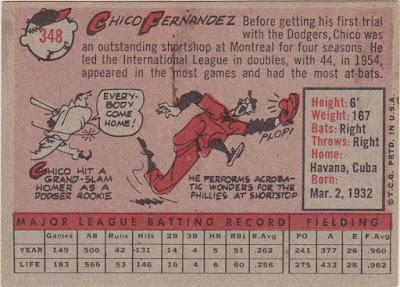 Cuban-born Humberto 'Chico' Fernandez spent six seasons in the Brooklyn Dodgers' system beginning in 1951. Moving up the ladder he had hopes of replacing Pee Wee Reese as shortstop but in his 34 games with the big club in 1956 he didn't hit much. The Dodgers traded him to the Phils and he became their starter at that spot for two seasons. In 1957 he had a career best .262 average.

His numbers tumbled in 1958 as his average dropped by 30+ points. In limited duty in 1959 he continued to lose traction. A trade to the Tigers revived his career if not his average but he did handle the shortstop job regular in Detroit for three seasons. He hit 20 homers in 1962 having never hit more than six at any level prior (and never again approached double digits).

His BR Wiki page has the following tidbit: on May 8, 1963, he had the distinction of being traded twice in the same day. He was dealt by Detroit to the Milwaukee Braves, who then swapped him to the New York Mets.

Fernandez finished up his big league career with a stint with the Mets in 1963 but continued to play professionally in Mexico, Japan and back here stateside in the high minors through 1968. He worked for 20 years after baseball as an insurance agent for Met Life. He passed away in Florida last summer at the age of  84.

His is not the only Phillies player on a yellow card but it is the only one on which the yellow logo sits on the yellow background. That bugs me for some reason.
Posted by Commishbob at 5:33 PM