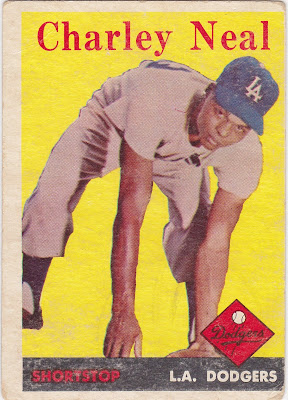 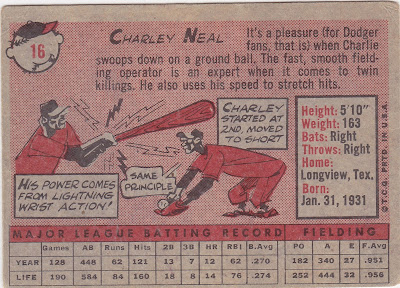 Posed action shots are few and far between in the '58 set but when they pop up I love 'em. 'Charley' Neal's card is no exception. You also have to love the fact that the card attributes his power to "lightning wrist action".

First of all, this is the last time for a few years that Topps referred to him as 'Charley'  Beginning in '59 he was the more common 'Charlie'. Then in '62, it was back to 'Charley'. For whatever that's worth.

Neal debuted in the low minors in the Dodgers chain in 1950. For a brief time he was on the roster of the Atlanta Black Crackers of the Negro Southern League. He fought his way up the ladder before debuting in Brooklyn in 1956. He grabbed a regular role the next season as the club's second baseman. He kept a starting job, either at second or short, for the better part of five seasons.

His 1959 season stands out. Neal made the first of two consecutive NL All-Star squads, led the NL in triples and sac hits, won a Gold Glove and finished #8 in the MVP voting. To say nothing of earning a ring as the Dodgers won the World Series. Oh, that Series? He was 10 for 27 with two homers.

His play fell off in 1960/61 and he was traded to the expansion Mets in December of 1961. After a season and a half in the Polo Grounds he was dealt to the Reds partway through 1963. That was his final big league season.