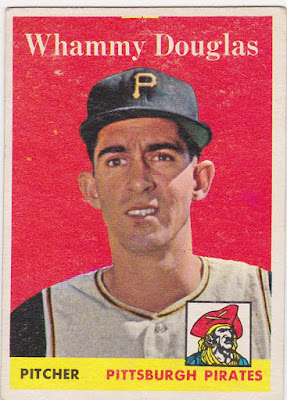 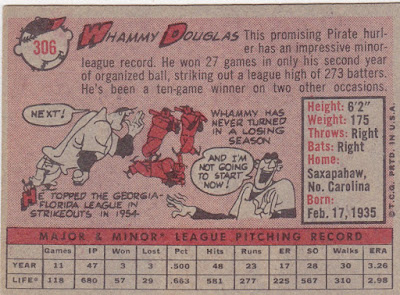 Whammy Douglas (born Charles William Douglas) was coming off his rookie (and only) major league season when this card was issued. He had a 3-3 record with the Pirates in 1957 in 11 games. He had eight starts after being promoted to the big club in July.

Douglas had a 27 win season in the low minors in '54 and climbed the ladder to the majors from there. The card credits him with 273 K's in that '54 season but his Baseball Reference page can't confirm that.  He spent the 1958 season with the Buc's AAA team in Columbus but apparently Pittsburgh gave up on him after that.

Douglas was traded to the Reds in January of 1959 and was given a sweet (heavily airbrushed!) card in that year's set but he never pitched in the majors again. He hung around with the Reds and Senators organizations through 1961.

Douglas, who lost the sight in one eye because of a childhood accident, was profiled in this neat MiLB article from 2008. I linked it on my '59 Topps blog and it's worth a look if you didn't read it then.