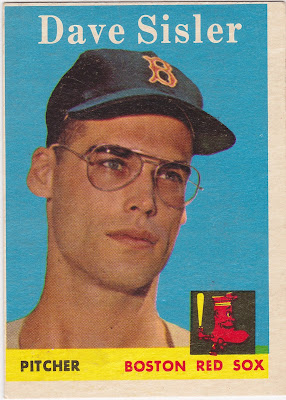 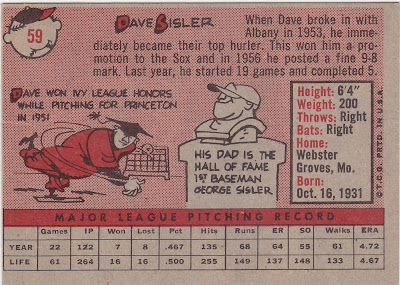 Dave Sisler was a St. Louis native who signed on with the Red Sox out of Princeton in 1953. He had a natural baseball background as his father, Hall of Famer George Sisler, and one of his brothers, Dick Sisler, also played baseball in the big leagues. Another brother, George Sisler, Jr., was a general manager for several minor league baseball teams, and later became president of the International League from 1966 to 1976.

He had a nice first year in the minors and then served two years in the military before returning to baseball. He began as a starter and pitched for three seasons in Boston and part of a fourth before being dealt to the Tigers early in the '59 season.

He spent the rest of his career as a middle relief innings eater and sometimes closer as he bounced from the Tigers to the Senators and finally the Reds in 1962. He retired after spending 1963 with the Reds' San Diego club in the PCL and went to work in investment banking.

I got a kick out of the mention, in his SABR bio, of Sisler playing corkball as a kid. My best friend is from St. Louis, the birthplace of the sport, and he introduced all of us in the dorm building we occupied to corkball back in 1970. We played for hours out in the yard between the buildings of the dorm complex. Probably should have spent more of that time on productive things.
Posted by Commishbob at 11:13 PM