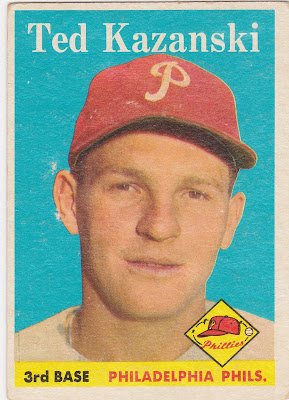 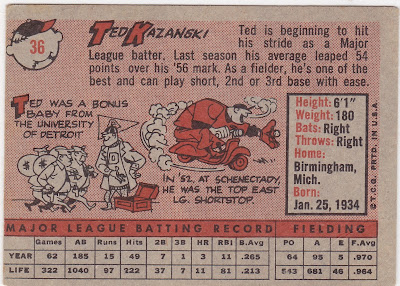 Ted Kazanski played six seasons with the Phillies and had rather pedestrian numbers but he did have one fine moment in the sun. On September 25, 1955, he had an inside-the-park homer and started a triple play in a 3-1 win over the Giants in the Polo Grounds.

This page has some details about Kazanski's big day including his recollections and a newspaper account.

“I remember the triple play because it ended the season," Kazanski said. "It was the last play of the season and I think it was the last game that Leo Durocher managed the Giants. I remember that part of it. They got the first two men on. [Joey Amalfitano singled and Whitey Lockman walked.] We were winning the game 3-1. I think Bobby Hofman pinch hit. I was playing closer to second base for a possible double play. He hit a line shot right at me, I flipped to Bobby Morgan and he threw to first [Marv Blaylock] and the season was over! I don't remember the home run too much. The left and right center gaps were a mile away.”


Kazanski played quite a bit of minor league ball and was a member of the old IL Baltimore Orioles when that club was an affiliate of the Phils. He was 4th in fielding pct in the NL in 1956 which was his busiest year in the majors.

When I was assembling my first vintage set, the 1959 Topps, his card was the last one I needed to complete it and it was sent to me by fellow Orioles collector, Ed Schott. It was one of the very first of many generous card 'gifts' I've received since I began blogging and I remember it well.
Posted by Commishbob at 12:22 PM