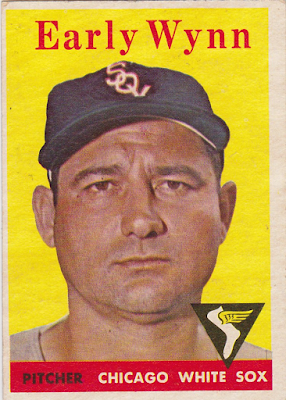 Early Wynn won 300 games (exactly) in a big league career that stretched from 1939 through 1963 for the Senators, Indians and White Sox. He was a seven time All Star and the 1959 AL Cy Young Award winner. Wynn pitched for a couple of World Series teams, the '54 Indians and those '59 Sox. He went 1-2 in five Series starts overall.

Wynn stares mournfully out at us from his card. The S-O-X logo has been added to what is probably an Indians cap. In December of '57 he was brought over to Chicago in a deal that sent Minnie Minoso to Cleveland.

A bit of surface wear doesn't take much from this card which is one of the better ones I got in my original large lot purchase. The scan makes the corners look better than they are but they are still pretty solid. 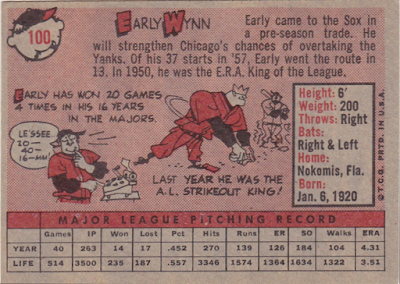 WikiFacts: Wynn was the last active major leaguer who played in the 1930s, becoming one of only 29 players in baseball history to have appeared in major league games in four decades. His durability helped him lead the American League in innings three times (1951, 1954, 1959) and propelled him to an AL record for most years pitched (23).

Wynn was remembered for his toughness and for the frequency with which he threw at batters. He once stated, "I'd knock down my own grandmother if she dug in on me." He also said to reporters: "Why should I worry about hitters? Do they worry about me? Do you ever find a hitter crying because he's hit a line drive through the box? My job is getting hitters out. If I don't get them out I lose. I don't like losing a game any more than a salesman likes losing a big sale. I've got a right to knock down anybody holding a bat." When he was then asked whether he would have the same opinion if the batter were his own mother, he paused and responded, "Mother was a pretty good curveball hitter."

In fact, when Wynn was with the Indians, he actually threw a pitch at his own 15-year-old son, Joe. Wynn was throwing pre-game batting practice to Joe, and Joe hit two long drives in a row. Ushers in the nearly empty stadium began to clap. Moments later, Joe was lying flat on his back in the batting cage, frightened by his father's knockdown pitch. Wynn said later, "He was leaning in on me, and I had to show him who was boss.

Posted by Commishbob at 9:07 AM