Welcome to the first post of this blog dedicated to the glory that is the 1958 Topps baseball set. I hope you will come to enjoy these cards as much as I do.

I've mentioned in other places that this set contains the first baseball cards I ever held in my hands, or saw for that matter. Having just moved out from Brooklyn I was a second grader in Jericho, Long Island and a girl who lived in our neighborhood had some. I don't remember her particularly, or which cards she had but I remember being enamored with the bright, colorful cardboard photos.

I was just becoming a fan and the cards connected me to players I was beginning to learn about by watching and listening to Yankee games with my Dad. It was right around this time that he began taking me to ballgames and I was soon hooked..a status I've maintained (with the exception of the post-1994 strike/lockout period) ever since.

I don't think I owned any '58 Topps cards. My collecting began the following season with some '59 packs I received at Easter and grew to a 'hobby' in 1960. Those three sets form the 'cornerstone' of my decades long collecting 'bug'.

This is the final one of the three that I am chasing and blogging. It's been a fun adventure so far and I hope you will make this a regular stop on your blog reading journey. Let's get started. And there are few better ways to kick off a new blog than with a post featuring Sandy Koufax, am I right? 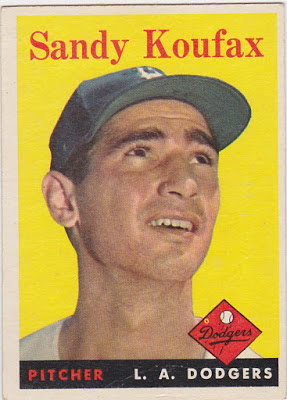 In 1958 Sandy Koufax was still a few years away from being Sandy Koufax!! He went 11-11 in 26 starts as he moved into the Dodgers' rotation on a nearly full time basis. He led the NL with 17 wild pitches and walked 6 per 9 innings. Both of those indicating that he had yet to harness his incredible 'stuff'.

The first of many 'head shots' in the '58 Topps set (hence the blog's title) Koufax has a Brooklyn Dodgers' cap on here. The card's back touts 'bigger things to come' for him. I'd say they were correct. 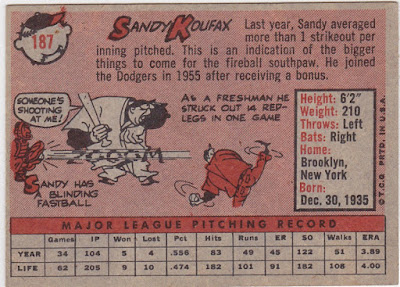 WikiFact: On September 29 [1957] Koufax became the last man ever to pitch for the Brooklyn Dodgers before their move to Los Angeles, by throwing an inning of relief in the final game of the season.
Posted by Commishbob at 12:06 PM